This is another one that has sat around for some years. Like many of the Emeralds, it is difficult to separate the species especially when there are a number of photos identified as a certain species but differ from the identified species on a site like Bold Systems.
It is all a bit of a guessing game really.
However I do think this one is Cenochlora quieta.
Distribution of samples taken is fairly small including our area here near Toowoomba and a little to the North and East of our location and one instance on the North Coast of New South Wales.
Wing span about 20mm (judging from the flyscreen).
I found no information on the biology of this moth. 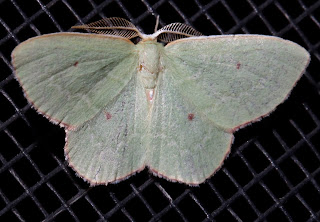