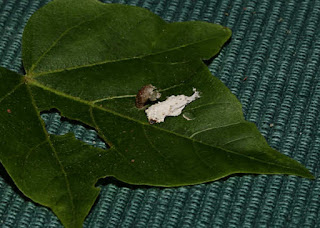 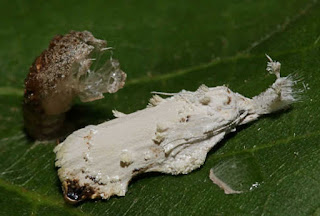 This moth is likely to be Tonica effractella since this is the main one I can find that has been collected anywhere near here.
In Australia they are said to be in Northern Western Australia, the Northern Territory and Queensland to Tamborine Mountain although some species maps show Tonica species collected around Wingham in central New South Wales.
The difference of opinion in the range may be due to there being different species. Many of the samples on the Bold Systems Taxonomy site are simply labled Tonica species with a number.
The larval food plants are mainly Brachychiton species although they have been found on related species like hibiscus and also on cotton, where they can cause crop damage. In the photo showing the leaf, it was found to have pupated on Brachychiton discolor (Lacebark tree). We also have a number of other Brachychiton species on our property and, because we see quite a few of these moths, the larvae are likely to be feeding on some of the other trees as well.

The raised areas on the wings are tufts of scales and those rather spectacular labial palpi also have rather long scales on them.  Overall length is about 20mm. 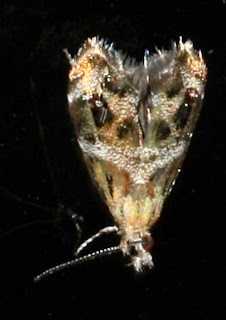 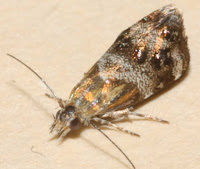 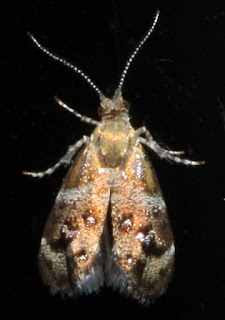 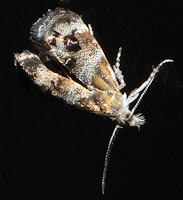 These are a very small moth. It is easy to miss seeing them but they are quite a decorative moth when seen close up. The family CHOREUTIDAE have patches of highly reflective scales on their wings earning the name "metal mark moths". They are difficult to photograph because of their size and they are very active.
The photos show some of the changes in appearance with different light angles.

Although active during the day they will come to light at night especially if the light has a blue/UV component.
Many moths are attracted to lights. Tungsten lights, cool white flourescents will attract some. I also use a small low powered, party ultra violet globe in a desk lamp. The light needs to be minimal because I am interested only in the moths (and other insects) on our property. Entomologists collecting over a large area use mercury vapour lights.

The larvae feed on the leaves of everlasting daisies, scotch thistle and others in the ASTERACEAE plant family eating out the material between the upper and lower surfaces.
Maximum wing span would only be about 8-10mm. 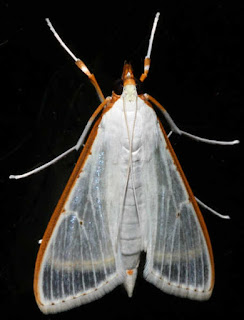 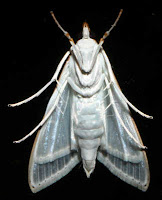 It is not easy to be sure of the identification of this moth. I have checked all the sample photos that I can find on various sites and believe that it is correct. The only other possibility is Palpita margaritacea (below) in the same sub family but they don't have the dot in the middle of the hind wing visible in some of my photos.
When looking for samples I should point out that some sites put both the moths in the Crambid sub family of Pyraustinae rather than Spliomelinae. 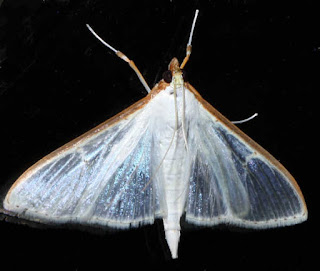 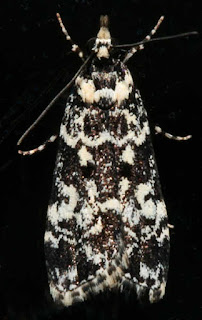 
It is likely the larvae of these moths feed on grasses. 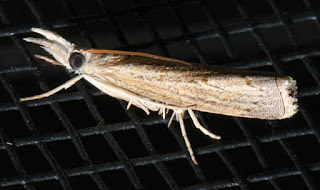 
You can see by the size of the flyscreen mesh in the photo that these are quite small moths. They have a wing span probably around 10 to 12mm.
Another grass moth. Can damage couch grass.