Moths age. They often look tattered and torn with damaged wings, legs missing, broken or missing antennae and so on. One of the most difficult from an identification point of view is the loss of scales.
The reduction in markings and colours can make comparison difficult.
It is not uncommon to have an old moth with no scales on its wings, leaving only the underlying membrane. 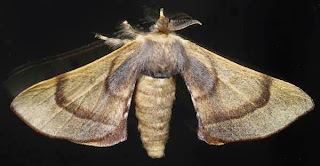 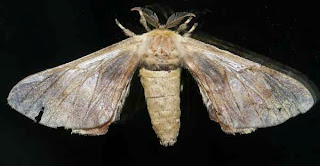 Left:- There are no longer has scales on its wings.

The photos of Gastridiota adoxima BOMBYCIDAE above, and Sceliodes cordalis CRAMBIDAE
below, both show the moths in good condition and after they have lost scales. In the case of Gastridiota adoxima, because it is a fairly rare visitor here, it is probably the same moth and the nearly total loss of scales was a little over a week.
The family BOMBYCIDAE includes the commercial silkworm moths and the larvae feed on native figs (Ficus (Moraceae)). 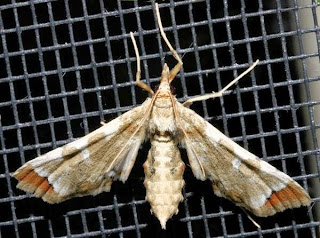 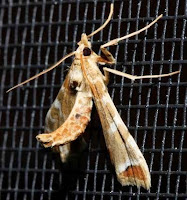 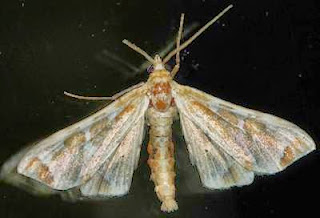 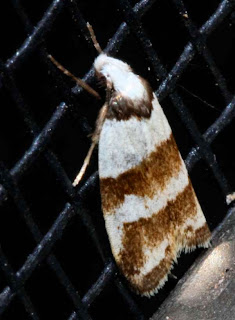 There are moth caterpillars that help reduce leaf litter in the forest and in our gardens and they mostly belong the the family Oecophoridae. There is a great need to understand these moths and their place in our ecology. As shown below, caterpillar numbers on the forest floor can be quite highs:-

Those figures, above, of 438 larvae per square metre and the second of 54 to 252 in just 130 grams of leaf litter (dry weight) means that a healthy forest floor is teaming moth larvae. There are of course many other insects on the forest floor as well.

From “Moths of Australia” (I.F.B. Common 1990). “ The food plants of 330 of the Australian
species of Oecophoridae, which, (in 1990), had been recorded, 80% depend on the family Myrtaceae, 70% of those feed on Eucalyptus. The sub species Oecophorinae, (over 2000 described species in 1990, probably more now), 94% feed on Myrtaceae, 88% of those feed on Eucalyptus and 56% of the ones that feed on Eucayptus eat dead Eucalyptus leaves”.
This gives a bit of an idea of the work being carried out by these tiny insects. 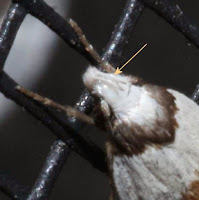 
The arrow in the above photo is pointing at the labial palp that is typical of this family. Sharp,  upturned and sometimes well out in front of the head. You can get a larger view by clicking on the photo.
Posted by Don at 19:47 No comments: 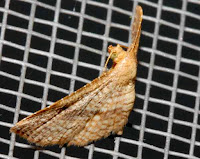 Another unusual moth family here. Some times called  "Picture-winged Leaf Moths" because of the pattern on their wings. A small moth, body length about 12mm. (The screen grid is 2mm). 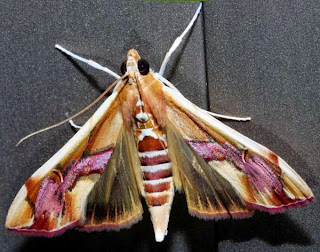 
Brightly coloured though they are it is still easy to miss them because the colouring depends to a great extent on the angle the light hits the scales.
Posted by Don at 15:18 No comments: 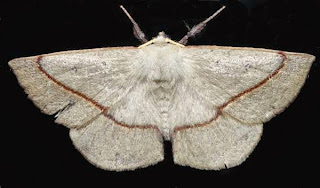 
There are many moths in Anthela genus and they vary considerably in colouring and pattern, so are very difficult to separate into individual species. 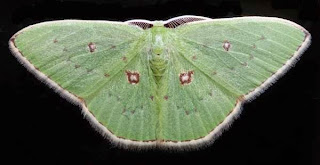 
This photo was taken in April this year and is still in surprisingly good condition. 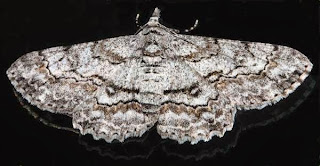 
As with the Anthelidae moth above, the Cleora  are many and varied. In most cases it is not possible to get down to species level.