Since I am now using the later classification of EREBIDAE which came from the splitting of NOCTUIDAE I have made a list of the sub families that have had samples taken in  Australia. 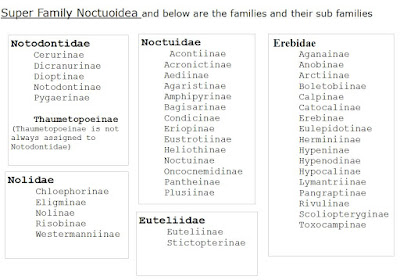 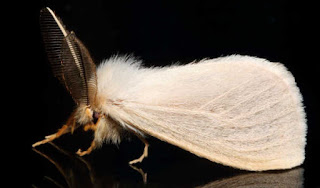 Small white moths can be difficult to identify so there is plenty of room for error.

Note the spurs, one long one short on the hind leg. The moth is missing a lot of scale. 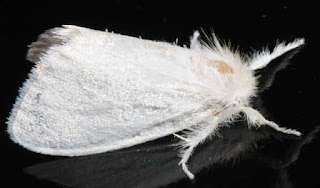 The family EREBIDAE has split up the family NOCTUIDAE and LYMANTRIIDAE has now been placed as a sub family LYMANTRIINAE of EREBIDAE.  (EREBIDAE now also includes the old family Arctiidae as a subfamily ie. EREBIDAE ARCTIINAE.) (Watch those word endings).
There are going to be many such changes as moths are re-identified. In the interests of people like me with older books and using sites that, although extremely helpful, are still using the old divisions I will try to put both the old and new names in each post. The changes have been around a while now so perhaps it is time for me to start catching up.

Previously named Leptocneria reducta LYMANTRIIDAE.
Common name, White Cedar Moth, and the caterpillars are sometimes called "itchy grubs" because of the irritating scales that can cause severe itching.
Larval food plant is Melia azedarach ( Meliaceae), common name white cedar (and 10 other common names), named for the appearance of the timber.
The White Cedar tree fruit and leaves are toxic to livestock , dogs and humans and the caterpillars do not seem to be generally eaten by birds. Some animals and birds are not affected. 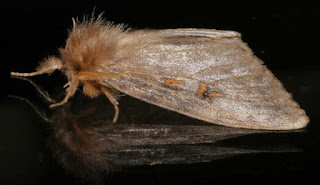 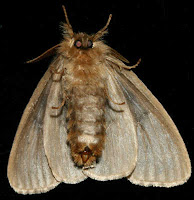 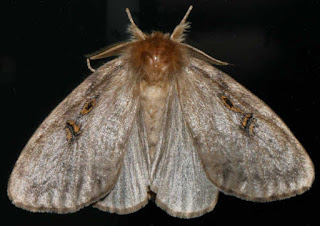 The larvae feed on a wide variety of plants but in our case the most likely plants are Acacia (Mimosaceae), Grevillea and Macadamia (Proteaceae).
This is one of the species where the females are flightless, limiting the ability of the species to spread to other areas should the host tree die or be removed. 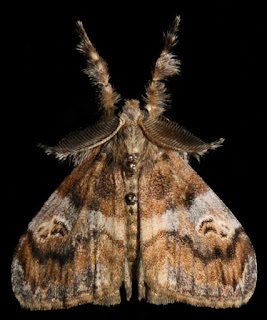 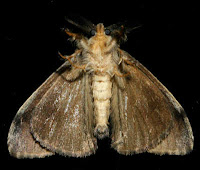 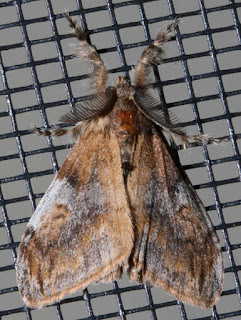 I have included the photo on the left because of the colour differences. I believe it is still Orgyia australis but it is an old moth and has lost a lot of scales.
There are also a number of other Orgyia moths with similar markings.

I previously had this moth as LYMANTRIIDAE poss Euproctis sp but a kind reader was able to correct the identification. 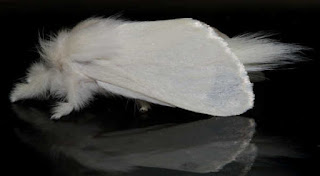 The larval food plant is Eucalyptus and they mostly feed at night, hiding during the day. The proboscis is very short and this possibly means the adults do not feed.
The adults are said to feign death if handled but I haven't seen it happen. The males come readily to light, this is probably a male because of the long scales on the tail.
The caterpillars can also apparently be processional.

NOTE:- this post was originally named Calliteara farenoides but it has been pointed out to me that the double line above the tear drop on the forewing means it is C. pura. I will add the label "probably" to the species name because there is a small chance that there is some confusion in the reference sites.
It seems that C. pura is probably the correct name. 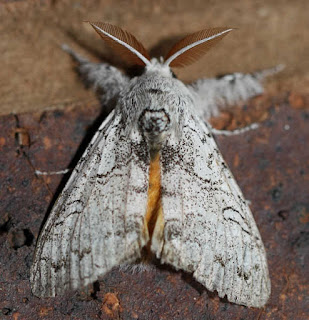 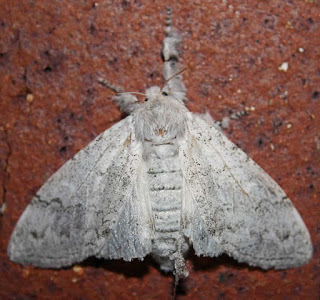 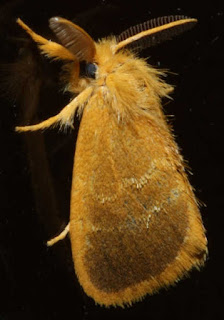 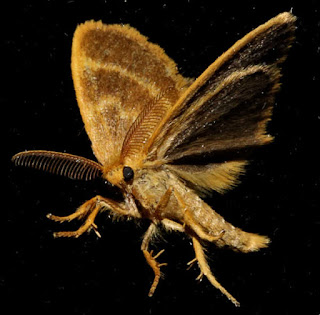 I was not able to find much information on these moths. They tend to be more tropical, and are a lot more common closer to the coast but we still see them here often.

Previous name:-  Chionophasma fimbriata and this is the name that was used in Moths of Australia (Common 1990).


The most likely larval food plants here  are :-

As far as I can tell, the moth under the name Parasa callidesma in Moths of Australia (Common 1990), may have been a previous name of  Eloasa callidesma .
The adult moths of LIMACODIDAE often do not have a proboscis and therefore are not able to eat.
The larvae possibly feed on Eucalyptus (MYRTACEAE).
The adult moths have a red collar just behind the head, just visible in the side photo. 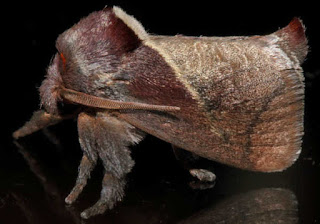 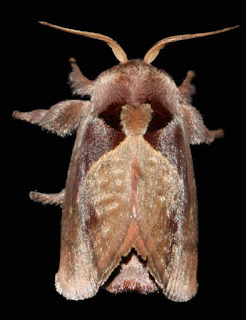 The larvae of this species feed on Macadamia (Proteaceae), Dodonaea triquetra (Sapindaceae) and Camellia. 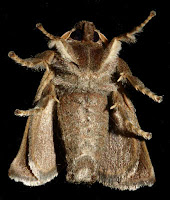 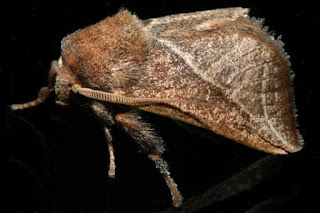 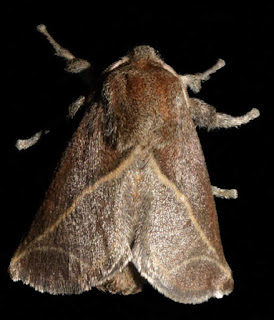 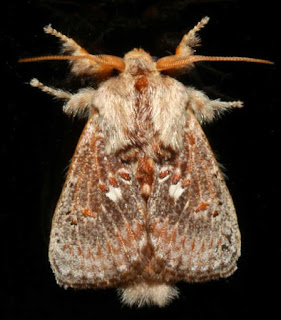 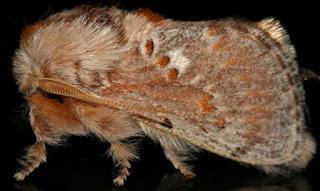