The eyes have it

I have previously done a blog on Speiredonia spectans, but here I have added a similar moth for comparison. Both moths are very common here and are fairly easy to confuse.

Part of the description of this moth in Moths of Australia (IFB Common, 1990), is that the wings of both Speiredonia and Dasypodia sometimes have eyes pots on the forewing and sometimes both wings. The main word here is "sometimes" , which means they sometimes don't have eye spots. Looking up photos of S. spectans on the BOLD Systems site, they do indeed have two photos of S. spectans with few markings on the wings and no eye spots.
Various sites quote the larval food plant as Acacia, (MIMOSACEAE), and one site as Acacia and Drypetes deplanchei, (EUPHORBIACEAE). In our case we have both plants and indeed, we do get a lot of these moths.

I wrote a blog about Speiredonia spectans on Wednesday, 8 July 2015 on the subject of the changing colours of the wing scales.
The wing span about 80mm.

Dasypodia cymatodes, the common name is "Northern Old Lady Moth" which I am sure is in retaliation to the common name of Speiredonia spectans which is "Granny's Cloak Moth".
The larval food plant is also likely to be Acacia species.
The wing span is also about 80mm. 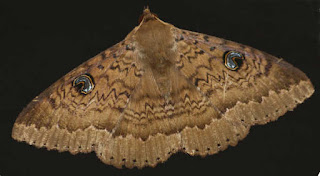