Another new moth. They are coming thick and fast this year. This one is said to breed on  Exocarpos cupressiformis, (SANTALACEAE), common name "Native Cherry". Exocarpos cupressiformis are partly parasitic on the roots of plants around them, and are not choosy. They are said to be able to use grasses, Eucalypts, wattles, Casuarinas, Banksias, Grevilleas, and plants in the pea family. As far as I know we do not have any E. cupressiformis here but we do have other species of SANTALACEAE.
The larvae of other members of the Genduara genus have been found feeding on mistletoes (LORANTHACEAE), and other members of  Exocarpos, so it is possible that the larvae of G. punctigera are able to live on some of these other plants.
The common name of the moth is "Spotted Clear Winged Snout Moth", because the males often have nearly transparent wings. 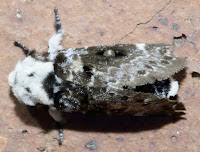 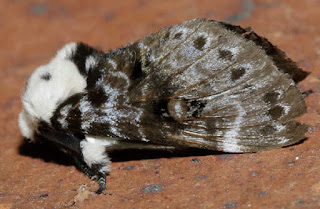 Further information on the host plants can be obtained from the Toowoomba Plants site link in the right hand column of this blog and searching for the plant family names.

The larval food plant is  Lantana ( Lantana camara, VERBENACEAE ). There have been many attempts to introduce insects that will eat the pest plant Lantana. A strain of H. laceratalis was introduced to Hawaii, Norfolk Island and Queensland in an attempt to control the weed.
There have been a number of attempts to introduce moths to Australia to control Lantana, in 1914, 1957, 1958 and 1965, but they appear to have had little or no effect in controlling the spread of the plant. 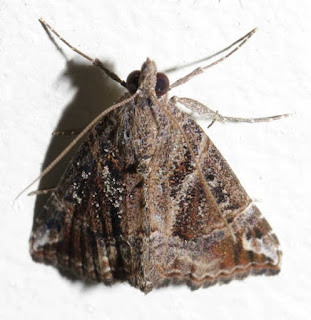 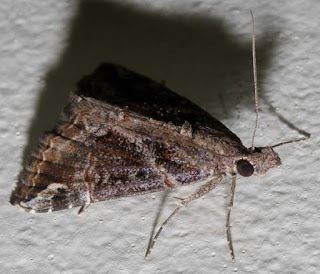