Although we had some rain recently, the number of moths on the windows at night have reduced to only a few moths where in a good season we get many many hundreds of moths coming to the light at night. This is the second year we have had such low numbers.
I was therefore surprised a couple of days ago to find that there were three new species in the 10 or so moths on the window.

Edited February 28th 2018. Thanks to Nick (see comments below), I am now able to put a name to this moth.
I previously wrote:-

"This first one I have not been able to identify. I have spent a great deal of time searching and I am still not even sure which family it belongs in. It looks as though it should be in one of the Gelechioid families but they usually have sharp up pointing palpi. For a tiny moths this one has quite large thick palpi held horizontally in front of its face."

The overall length was around 5mm.

After having been pointed in the right direction by Nick, the first moth I looked at was actually a sample that had been collected in Toowoomba.
This is also another new species and another new family for this place.

I initially thought this one might belong in URANIIDAE. 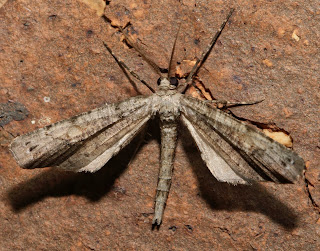 The species is quite variable but once again with the help of Nick (who uses the name Dustaway on Flickr) I think it is most likely N. elongata 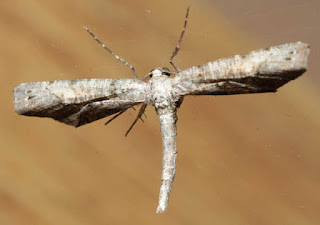